Sequels to M3gan and Tron are in the works.

After the surprise success of Blumhouse & Atomic Monster’s M3gan, no surprise to hear that the original team – including actress Alison Williams and Violent McGraw – be back for 2025’s Megan 2.0.

Per Variety, a director has not been announced for the sequel. The pic, to be penned by Akela Coooper, will open Jan 17, 2025.

Joachim Rønning is directing the film, said to be a sequel too TRON : Legacy, which is eyeing a production start in Vancouver in August. 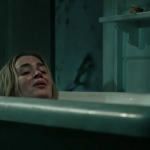