Official Synopsis : A mysterious death of a mother and the disappearance of her child leads a group of freelance journalists to the outback of Sweden. The group of four, led by the famous journalist Linn Söderqvist, will make a reportage about the happening and search for leads missed by the police. Equipped with cameras and supplies to survive in the forest for days, they wander out in the woods to find the truth.

What we say :  While not of the calibre of Paranormal Activity or The Blair Witch Project, this grassroots found-footage effort from Sweden encompasses some decent scares, imaginative direction from Carl Sundström, and a welcome sense of dread hanging over proceedings from the first frame. What it lacks in budget, it makes up for in effort – getting far more right than it gets wrong.

Official Synopsis : Join Dr. Sam Beckett (Scott Bakula), a time traveler lost in time, who temporarily leaps into the bodies and lives of other people to put right what once went wrong. Accompanied by Al (Dean Stockwell), a wise-cracking holograph that only Sam can see and hear, Sam twists the hands of fate with each heart-pounding, action-packed adventure in the hopes that he can someday complete the mission that will take him home. Get ready for an adventure of many lifetimes with all 97 thrilling episodes from the ground-breaking sci-fi classic, QUANTUM LEAP.

What we say :  Oh boy, where do we start!? What a refreshing blast from the past creator Donald Bellsario’s Quantum Leap is in this day and age. With plots both creative and fun, albeit ridiculous at times,  charming performances from Bakula and Stockwell, and an abundance of warmth, you’ll zip through these episodes within a week- it’s like a sugar rush! You can’t get enough!   It’s not the Blu-ray set that some other territories got but just have this bit of divine madness unspooling in the player is gift enough.

Official Synopsis :  An aspiring actor makes ends meet by working as a simulated patient in odd alternative therapy sessions. When his roommate vanishes, he’s saddled with mounting problems, including a dog and a cardigan possessed by a ghost.

What we say :   Roberto Doveris’s deliciously creative LGBTQ paranormal drama story should prove far more appealing than it’s slightly pigeon-holing synopsis suggests. Fixing on a day in the life of the title character, more so than just having him encountering a spirit, it’s essentially a ditty about a bachelor discovering a love for acting (likely a semi-autobiographical tale, I’m thinking) – but having to cross some brain-ticking hurdles before finding the answer to his issues.  Cool, creative concepts like this don’t come by too often.

Official Synopsis :  A young family are visited by ghosts in their home. At first the ghosts appear friendly, moving objects around the house to the amusement of everyone, then they turn nasty and start to terrorise the family before they “kidnap” the youngest daughter. The Freelings are a typical suburban family.

What we say : Remember the disappointment when Poltergeist hit DVD for the first time?  Something happened on the way to DVD Supplementary Materials Heaven, it seems near everything was extracted from that section like a black tooth from a sore mouth.

All these years later, we’ve got a beautiful 4K-  thank you to gods hovering above the Indian Graveyard!  I love this movie – considering how ‘family friendly’ it is, it’s such a terrifying movie, and holds up beautifully! – and think they’ve done a wonderful job on the 4K edition. From a transfer that pops and sizzles to all-encompassing documentaries that front the bonus section, it’s a delight. 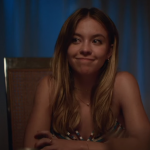