Scuttlebutt today that a remake of John Carpenter’s 1998 horror flick Vampires is being redone over at Sony Pictures.

With John Carpenter having hinted in recent times that several of his properties are getting updates in the coming times, no surprise that Sony might first drink from one of the easiest wells to empty. Guessing Ghosts of Mars will be next.

While no details have been released, and it’s not known whether the film will have a link to the original James Woods-starrer, Daniel RPK has confirmed that the film is indeed in the works. Likely, it’s direct-to-digital (or even Sony’s Crackle service?) 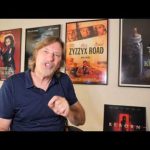