South African actress Anja Taljaard will never forgot the chills she felt down her spine watching the Dark Castle horror pic “Ghost Ship” all those years ago. She hopes you feel the same tingly sensation when watching her new film “Glasshouse”.

Where are you writing from, Anja?
From Cape Town South Africa.

How long ago did you shoot the film? Something you managed to get done during the Pandemic?
We shot the film in November 2020, smack bam in the middle of pandemic chaos and funny enough the location we were shooting in became a Covid hotspot about 1 or 2 weeks into our shoot.

Was it held off for release because of the pandemic though?
As far as I know everything went more or less according to schedule. We were incredibly lucky and had an amazing post production team.

What interested you specifically about the subject tackled here?
Before the subject matter gripped me I was absolutely entranced by the individuality and complexity of all the characters. Especially Evie, the character I was lucky enough to get to play. They were all so layered. But most of all I loved how high all the stakes were in this screenplay. It tackles so many different subjects it’s hard to choose one.

Is this a genre you’ve played in before?
Well I feel like this film consists of so many genres simultaneously, but I have played in a South African feature film that deals with similar types of subject matter before in terms of the complexity of relationships and emotion.

Were you encouraged by Kelsey to improvise or add anything to the character that wasn’t on the page?
Kelsey [Egan] is an amazing director. She’s an actress herself so she’s an actor’s director. She’s so great at taking what you give her and molding it into this amazing final picture. She’s always open to taking suggestions but is also so clear in what she wants to achieve. It all works very harmoniously.

Since your journey on the film, has it opened doors for you?
I wouldn’t say it has opened any doors for me in terms of hollywood. Even with technology being as good as it is it feels like we’re still a bit removed from that part of the world, but I think the world will start seeing the talent South Africa has to offer soon enough. At this moment in my life I’m not too worried about any doors opening. I’m just incredibly grateful for having been a part of Glasshouse and what an incredible learning journey it was for me. I’m truly so proud of it.

A horror outlet would be robbing itself of an opportunity if we didn’t ask, what’s your favorite horror flick?
It might not be the best horror film ever made but it will always be my favourite horror film for one reason and one reason only; it’s the first one I ever watched and I’ll never forget the way I felt watching it: Ghost Ship.

GLASSHOUSE is on digital platforms now 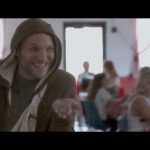 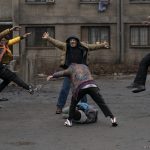