Even amidst the sinister fog of Lone Palm Beach, the protagonist of Mickey Keating’s latest horror film “Offseason” will be instantly recognizable to dedicated horror hounds.

Actress Jocelin Donahue – who made her lead role debut as babysitter Samantha in Ti West’s 2009 occult classic “The House of the Devil” – is a modern genre icon. From major features like “Insidious: Chapter 2” (in which she played a young version of Barbara Hershey’s Lorraine Lambert), Mike Flanagan’s adaptation of “Doctor Sleep” by Stephen King and Terence Malick’s “Knight of Cups” to roles on Fox’s “Lethal Weapon” and Showtime’s drama hit “The Affair”, Donahue’s versatility as an actor and passion for genre cinema shines through even the darkest on-screen shadows.

After receiving a mysterious letter, a woman travels to a desolate island town and soon becomes trapped in a nightmare.

We had the pleasure of talking to Jocelin about the long, bumpy road to the wide release of “Offseason” thanks to the pandemic, her childhood movie favorites and – if you can believe it – baking and books. What a treat!

We’ve recently passed the one year anniversary of the original premiere of “Offseason” at SXSW 2021, and now it’s finally seeing a wide release on Shudder. So much time can pass between the script landing on your desk and the audience watching the completed work – how does that passage of time typically feel to you?

Jocelin: Yes, this was quite a specific experience, because we shot the film right before the COVID shutdowns. We finished right in the first week of February 2020, and then it was a year before SXSW and another year before it came out. Here we are now, where it’s coming out on Shudder! Honestly, I’m usually itching for it to come out.

Of course, you always want people to see the work. For an actor, it’s fun to see it all put together; the things you don’t see when you’re on set. But in this case, it was a blur – a long time and no time. But it’s been nice to have those milestones and look forward to it over the last couple of years.

Looking back at some of your early interviews from the release of “The House of the Devil”, which was your breakout role, you talked about that film being an induction of sorts into the world of horror cinema: both as an actor and as a viewer. In what ways do you feel like your acting career has most influenced your taste and perspective as a lover of movies?

Jocelin: Every job you get, even if it’s not in filmmaking, your frame of reference just keeps getting bigger. In each job and each experience, you try to take something and you learn from your collaborator’s influences. And it’s true: you do learn what you like, yourself.

I think I was probably pretty spoiled to work with Ti (West) as my first lead role, because he’s got such great taste in cinema. Like so many horror filmmakers, he has such an earnest passion for the genre and what it can do. These days it’s just been fun to watch as horror becomes more and more mainstream, and people understand that anything can be scary and anything can be horror. Horror encompasses drama, trauma and it can be comedic.

Ti showed me some films that are still my favorite horror films. I still love the 70s and 80s classics: “The Changeling”, “Let’s Scare Jessica to Death”, so many. Each film widens my frame of reference, including on this one. Mickey talked a lot about his influences, too.

Even outside of horror, what kind of movies were you watching as a kid that were defining taste-makers for the rest of your life?

Jocelin: It’s always an evolution. As a kid, I loved “Gremlins”, and I used to love reading “Goosebumps”. I loved ghost stories as a child. As I got older, I started watching Kubrick stuff. And when I was in high school, “Pulp Fiction” came out, and I loved that. I loved the Coen Brothers’ stuff. Then I started loving P.T. Anderson, and yeah – just more and more education as I got older.

I would say probably “Poltergeist” was my first real horror movie that I saw as a kid. That really freaked me out. I also love sports movies like “The Sandlot”, and “The Cutting Edge” – I loved that as a teenager. “The Craft”!

I always love to ask about childhood favorites, because the answers can be really surprising. It’s not always the most obvious path from what you liked growing up to who you are now – it’s incremental and coming from different places.

On a rather different note, you’re quite the skilled baker. Is that a skill you picked up as a kid?

Jocelin: Thank you, first of all! Yes, that is my other passion. When I was in college, I started working in very nice restaurants; up-scale places with a great pastry chef. That’s where I learned a lot about food and wine.

Moving to California is when I really started cooking and baking, because we have such beautiful produce and citrus, and I finally had a really nice kitchen. Now I love cooking and baking, because it’s both a practice you can always get better at, and it’s something that really keeps you in the moment. And, of course, it’s just great to be able to serve something nourishing and special to people you love. Baking definitely has that wow factor, too, of serving beauty.

You’re also a bookworm, too, which I can totally relate to. Are there any books you’ve read this year, new or old, that really had a big impact on you?

Jocelin: I just finished “A Little Life” by Hanya Yanagihara. I think it’s about eight years old, but it’s this really beautiful book about chosen family. It follows four men who meet in college, and you follow them through their lives. One of them has had a very traumatic past. There are so many insights in that book that I keep thinking back on. I feel like the theme of that book is about how friendship is about bearing witness and being there and watching people’s ups and downs; seeing people for who they are and loving them for who they are. That’s one.

I also really loved “Cloud Cuckoo Land”, did you read that?

No, I haven’t! I’m literally writing these titles down, because I’m always looking for something new to enjoy. My to-read list is always too big, but I don’t care.

Jocelin: Okay, so “Cloud Cuckoo Land” came out last year – incredible book. It’s about a fake Greek myth; part of the book is the myth, and part of it is about how this book travels through time. It has a little bit in common with “Cloud Atlas” in that it goes from deep history into an imagined future. Pretty epic book.

Looking ahead; you have an upcoming video game project (“Immortality”) with Sam Barlow. I imagine that’s still a ways off from being discussed at length, but I’m really intrigued by what he’s doing with full motion video and cinema narrative.

Jocelin: I won’t say much of anything, because I want game players to discover it. But Sam’s mind is…it’s unreal how much bandwidth he has, and how much is in this game. It’s full video capture and it’s about cinema as well, so I think it’s something that gamers will love and cinephiles will really dig it too.

What else is on the horizon for you?

Jocelin: I wish I could say more! There is one project I’m hoping will come together this summer, it’s a really cool crime noir thriller. Hopefully that’ll be happening. Otherwise, I’ll be looking forward to “Immortality” coming out.

Watch Offseason now on Shudder or via the AMC+ Bundle on Amazon Video or Apple TV channels. 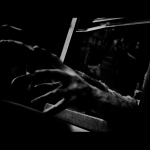 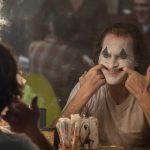