Sometimes it’s difficult to type or relay articulate thoughts with intentionally silly movies. CRABS! is the kind of film that I could easily just type, “Turn your brain off, pop an edible or get some beers, and enjoy the schlocky magic.” However, I can’t because you’re expecting an actual critique. All I can say in my opening paragraph is if my simplistic line above about the movie isn’t something that is in your own wheelhouse of pop-culture entertainment, just go-ahead and know you won’t like this movie.

For the rest of us though…CRABS! is a melting pot of Ed Wood and Japanese Kaiju monsters, with sprinklings of Gremlins, Tremors and CGI that might break Asylum films budget. CRABS! let’s you know immediately what kind of film you’re in for as the opening sequences are as follows: a crab makes cutesie noises as a nuclear power plant explodes, a young couple is having sex vigorously on the beach in broad daylight, a crab (potentially the one that got a front row seat to radioactivity) comes up to the couple only to kill the horny lovers. Once again, if your funny bone isn’t tickled before the title credits, then you won’t like the rest of the film.

CRABS! has an eclectic cast, featuring a boy in a wheelchair looking to create robotic legs, his girlfriend and her thirsty mom who teaches at the high school in town (she acts equally flirty and airheaded with the men and students in town), a foreign exchange student who is given the most ludicrous dialogue to say with his ridiculous accent, and a Sheriff’s Department that’s only made up of two men; both who really enjoy smoking pot. The plot, which there actually is one, is nonsense and almost unnecessary. Even a hint of scrutiny would make the plot crumble like a house of cards in a windstorm. Yet again, it’s definitely the kind of film that fits the phrase, “leave your brain at the door.”

However, even though the film wears its influences on its sleeve like a soldier being pinned with badges of honor, CRABS! really doesn’t offer anything new or different to a genre that’s ever changing and evolving. While it is an enjoyable trip, it’s not a film that’ll stick with you for years or even be begging for a rewatch; I’m not even sure if an unnecessary sequel is in the future for this film. “CRABS!” is intentionally terrible, and as long you understand that you might have a lot of fun with it. 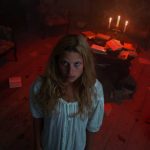