“The Expanse” actress Shohreh Aghdashloo has joined Nicolas Cage in “Renfield”, the Chris McKay-directed Dracula spin-off at Uni. Per Deadline, pic “centers on Renfield (Hoult), who has grown sick and tired of his centuries as Dracula’s (Cage) lackey. The henchman finds a new lease on life and maybe even redemption when he falls for feisty, perennially angry traffic cop Rebecca Quincy.”

Another “Star Trek” TV series? Yep, so says Deadline who hears a show set at the Starfleet Academy is in development for Paramount+.

“X-Men” scribe David Hayter will adapt “American McGees Alice”. Ed Zwick will direct the pilot for the eventual series, which will go out to networks after the pilot lenses. Per The Hollywood Reporter, “The TV adaptation will begin after Alice returns from the trip through the looking-glass to find that her house has burnt down and her parents died in the fire. After repeated attempts at suicide, she gets locked up inside a mental institution and is slowly wasting away there before she is summoned to Wonderland again by the White Rabbit. But this time it’s a Wonderland gone seriously bad and gory. The only chance for Alice to restore her peace of mind and find out more about the death of her parents is to fight through Wonderland and free it from the evil powers.”

Rick Cosnett will reprise his role as Eddie Thawne in The CW’s “The Flash”. According to Deadline, the actor will be in at least three happens and be reintroduced in an “unconventional way”.

Sophie Thatcher (“Yellowjackets”) and Chris Messina (“I Care A Lot”) will star in a 20th Century Studios adaptation of the Stephen King short story “The Boogeyman”, says Collider. A Hulu exclusive, the film will be directed by Rob Savage and boasts a producing committee including “Night at the Museum” helmer Shawn Levy.

J.J Abrams and Stephen King are reuniting – they previously collaborated on “Castle Rock” – for a “Billy Summers” series. Says Variety, “King’s novel follows Billy Summers, a former Marine sniper and soon-retiring hitman who takes one last high-paying job. For his last hurrah, he must pretend to be an aspiring writer to embed himself in a quiet town and hunt his target, Joel Allen, who is also a hitman. But soon Billy, who only takes jobs killing “bad” men, grows increasingly skeptical of the mobsters who hired him.”

New on Tubi, Steven R.Monroe directed spooker “Unborn” tells of an expectant mother (Jade Harlow, “The Bay”) that suspects that her unborn baby is possessed by the demonic spirit of her dead mother, while her wife (Ella Thomas, “The Storm”) questions her unstable state.

Taye Diggs and Jessica Uberuaga star in “Incarnation”, in theaters/VOD Feb 8 from Cinedigm. The Isaac Walsh-directed flick “centers around a young couple chasing the American dream. Brad (Diggs) and Jess (Uberuaga) move to Los Angeles in search of a better life. When they stumble upon a hidden real estate gem, managed by the laid-back landlord Peter (Michael Madsen), they are elated by their turn of fortune.”

The trailer for horror/comedy “Sweetie, You Won’t Believe It”  – out Feb 8 on Digital/VOD- has been released. What begins as a fishing trip with the boys quickly spirals out of control when they witness a mob hit in the forest, and that’s just the beginning of this insane, violent, hilarious misadventure from Kazakhstan.

A new trailer for Saban Film’s “The Girl on the Mountain”, releasing March 8 on Demand and Digital, has been released.  ‘Haunted by family tragedy, reclusive backwoodsman Jack Ward (Daniel O’Reilly) is given a chance at redemption when a young girl (Makenzie Sconce) fleeing abuse and murder, comes into his life. Safety and security are short-lived as the girl’s vengeful father and his posse converge on the two. Now Ward must summon his instincts as a paternal protector and face off against the sadistic intruders.’ 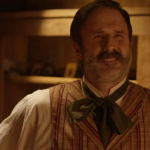 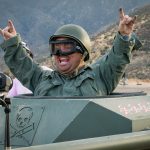