If “Scream” (2022) were a person, he or she would be someone whose words sung truer than their actions. They may make somewhat conventional moves from other’s playbooks but what comes out of their mouth is more significant, influential, and, for the sake of this analogy, memorable.

That was the entire motivation behind Wes Craven’s gory horror satire “Scream” (1996); with it, the horror master would serve up a typically traditional tale of a masked killer going after a group of randy teenagers but instead of genre-stapling woeful dialogue and direction, overlayed the seen-it-before-plot with a smart arse commentary on both past horror hits in his filmography (like “A Nightmare on Elm Street) but also the efforts of colleagues, John Carpenter (“Halloween”), Sean S.Cunningham (“Friday the 13th”) and Tobe Hooper (“Texas Chain Saw Massacre”), as well as the general, tired structure of any film labeling itself ‘horror’. In summary, you couldn’t watch the film with the volume down, as “Scream” had something to say.

Taking things one step further than the first four films in the series (all of which Craven directed; “Scream 4” being the last film he directed before his passing in 2015) – as well as the recent “Matrix” reboot, “The Matrix Resurrections”, which also tried to say something about brand milkage,“Ready or Not” helmers Matt Bettinelli-Olpin and Tyler Gillette‘s crank the meta knob to maximum volume here. As stand-ins for the late Craven (the film pays great respect to him too, just watch), the duo serve up a delicious shooting script of clever self-referential dialogue, movie-within-a-movie cleverness, and some welcome, brutal jabs at toxic fandom and over-the-top cynicism, especially where it comes to movie franchises. Some of the notes here may have already been passed onto us in 2011’s “Scream 4” but for the most part, “Scream” (2022) has a lot of new things to say…. and a lot of new blood to slay.

“Scream” – and yes, the movie even mocks the fact that this latest instalment, though the fifth in the series, shares the same title as the original – takes the Mickey (Altieri) out of not only the entire franchise that spawned from the cult 1996 horror-comedy but the many exploitative I.P offerings that Hollywood has produced since. And when it comes to today’s ‘requel’ trend, combining the OG stars of a past franchise with a group of newcomers in films that are designed to be both a reboot and legacy sequel (like “Halloween” (2018) and “Ghostbusters : Afterlife” (2021), writers James Vanderbilt (‘’Zodiac’’) and Guy Busick give spot-on self-aware commentary.

Like Craven’s original – and to an extent, “Scream 2” and “Scream 4” (less said about “Scream 3” the better) – while the tale at play may seem like any other studio-financed slasher flick, the delight is in the details.

At times the plot of Radio Silence’s (that’s the unit the filmmakers’ credit themselves as) revival resembles Craven’s first “Scream” but it’s for good reason – there’s intention behind those recycled moments, resulting in a zinger of a punchline. Maybe more than ever, the movie is motivated more by commentary on where the film industry and fan communities are now less than it is doing something new. You also can’t change the template of a “Scream” movie too much anyway – and not just because the films must play out not unlike any other slasher film, but because the audience now expects to see certain moments.

The traditional opening scene? One of the best since Drew Barrymore first picked up the phone to play horror movie trivia in the Kevin Williamson-written original. In this, “Ghostface,” the mask-donned killer and cornerstone of the franchise (voiced as always by Roger E.Jackson) gives home-alone teen Tara (Jenna Ortega) a call (on a landline, of course). Unlike her opening-scene predecessors, Tara is no fan of commercial horror films and instead tells the caller she’d rather watch “The Babadook”, “Hereditary” or another ‘elevated horror movie’ over one of those mundane “Stab” movies – fictional horror films inspired by the events in the “Scream” movies. Unfortunately for Tara, the life of her best friend Amber (Mikey Madison), hangs in the balance, and if she can’t correctly answer the questions of his slasher film horror quiz, she’ll be responsible for her friend’s death.

When news of Tara’s attack hits, the town of Woodsboro, cursed by Ghostface killings over the past 25 years, go back into panic mode.

Sam Carpenter (Melissa Barrera), who returns to town with nice-guy boyfriend Richie (Jack Quaid) after her sister’s attack, seeks the assistance of the now retired former sheriff, Dewey (David Arquette, reprising his role from the previous films) to find the killer. And as the body count continues to grow, Sidney (Neve Campbell) and Gale (Courteney Cox) also return to town, wanting to help stop whoever is responsible.

The “legacy” cast (the film makes mention that you can’t do a sequel these days without bringing back some original cast — “you can’t have Halloween without Jamie Lee!” says one player), consisting of Courteney Cox, David Arquette and original ‘Final Girl’ Neve Campbell mesh beautifully with some incredibly talented fresh faces. While none of their performances will likely go down in meme history as profoundly as Matthew Lillard’s deranged loon ‘Stu’ in the original, don’t be surprised if the fan pages of Jack Quaid (son of Dennis Quaid and Meg Ryan), Jasmin Savoy Brown, and former Disney starlet Jenny Ortega, all seemingly having the time of their lives here, shoot up in subscribers over the coming weeks – they’re divine. Some big stars in the making here.

“Scream” (2022) cleverly and amusingly gives a well-deserved middle finger to both franchises and fandom while serving up a surprisingly – c’mon, it’s the fourth sequel (or is that ‘requel’?)! – energized and enjoyable modern-day teen horror film. I’m thinking Craven wouldn’t just be surprised, he’d be tearfully overjoyed by that. 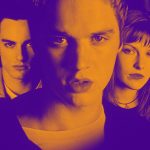 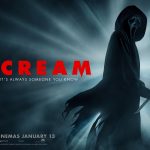