What is so wonderful about the world of cinema? There are so many wonderful and exciting things you can do on film. Experimental projects are a tough chance. Some of them can soar on the wings of creativity and bold drive. Others can crash with the weight of abstract elements or idiosyncrasies. But that is what is so great about film! You can do so much. Enter Boy Harsher. In anticipation of their latest album, they have created a horror movie short to accompany.

But is this a worthy effort with this new film, The Runner? This film works on two narrative plains. The top layer is a strange and dangerous woman making her ways through a small rural town. What is she up to? Bad things. This narrative is unstructured and free flowing but what triggers her actions is the music of Boy Harsher. The secondary layer of the narrative is the band preparing and performing on public access television. Their music is the driving force that compels the actions of this strange woman. What are her actions? Violence and murder.

Do these webs tangle well together? Boy Harsher act as the director of the film as well and they bring a grungy and old school feel to the film. The grainy cinematography is reminiscent of 70’s and 80’s horror. The feel of the film is atmospheric and haunting at every moment. The film is unnerving and scary as it channels those same old school horror films with some graphic gore of practical effects. The horror elements work well but the music really soars. These are some banger songs (every single one). Each song is played over the primary narrative but then they offer some great music video type visuals as well.

But what doesn’t work so well? The film basically has no narrative to speak of. The music and the horror are what drives the film. For a 38-minute short film, a well-paced and structured story might not be essential, but this film certainly makes zero effort to deliver an engaging narrative. The real drive is the psychological reactions that Kris Esfandiari’s protagonist has to the music and the lyrics. This is an effective and haunting poem in visual motion.

Is this short film for everyone? Not quite. But if you are into some great synthesizer music and slasher horror, this is a fun ride. You won’t be treated to an interesting or engaging story, but you will have plenty of atmosphere to enjoy. Check out this exciting new experiment over on Shudder. 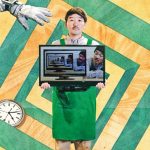 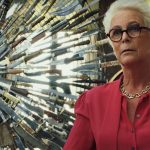