When you see Guillermo del Toro’s name attached to a new film, you expect high quality, right? Del Toro’s latest might not be a project that he is hands-on with, but director Scott Cooper has plenty up his sleeve to make this new horror film standout. But what is Antlers about? This is really a tale of two perspectives. We have the adult perspective of a struggling alcoholic teacher who has returned to her hometown after the death of her abusive father. Then you have a young man who is regularly abused who now faces his father’s new fate which includes a terrible curse that warps his desires for flesh and death. But at the heart of this film is a creature feature…which might be the most del Toro that you can get.

But how does Cooper balance all these moving pieces in this new horror film? The first two thirds of the film REALLY take their time. The opening minutes set up the terrifying creature which will haunt this town and the audience for the rest of the film. But then we are treated to a deep dive into the life of Keri Russell’s Julia Meadows. We see her struggle with confronting her past and the rocky relationship she has with her sheriff brother, played by Jesse Plemons. Then we see the disturbing circumstances of Julia’s student, Lucas. His father is sick (REALLY sick) and he begins to devour flesh and must be locked in their attics. Cooper builds some strong tension along the way but there is certainly some rocky pacing along the way. The film does rely upon the “magically minority” trope with Graham Greene’s character telling all the white people about some Native American curses.

But what happens when this film comes to a head? First off, the creature delivers in spades. When seen in its fully realized form, this will become a constant resident of your nightmares. The heightening violence and scares are quite disturbing as the audience is forced to watch some increasingly messed up occurrences. Unfortunately, the film does delve into some dumb tropes as some of our characters lose all their brain cells act in completely idiotic ways. The film luckily invested time in our characters so we at least cared about them when they lost their scenes. The finale confrontation feels a but awkward but is salvaged by some devastating consequences including a final frame that leaves the audience on a shocking note.

Cooper drenches this film in a stark and dour atmosphere but is it worth it? The film has plenty of ideas and themes centered around mining, the meth epidemic, and domestic abuse. But they never feel like they are completely embraced or confronted. The horror elements are incredibly effective and haunting in so many ways. This film will crawl up under your skin and last for days to come. The performances are top notch including a great showing from young actor, Jeremy T. Thomas. Antlers might be a flawed film but this stark and dread filled flick delivers enough to make it a worthwhile experience. 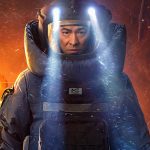 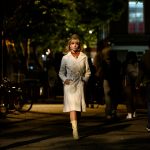