We’ve been chattering a lot about this one – a reboot of the popular Blumhouse horror series – lately. Without further ado, here’s the first trailer. 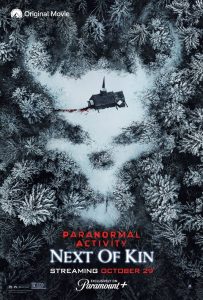 Oct. 6, 2021 – Paramount+, the streaming service from ViacomCBS, today revealed the official trailer and key art for its upcoming original movie PARANORMAL ACTIVITY: NEXT OF KIN. The new installment in the “Paranormal Activity” franchise arrives just in time for Halloween, and will be available to stream on Friday, Oct. 29, exclusively for Paramount+ subscribers in the U.S.

In PARANORMAL ACTIVITY: NEXT OF KIN, a documentary filmmaker follows Margot (Emily Bader) as she heads to a secluded Amish community, in the hopes of meeting and learning about her long-lost mother and extended family. Following a string of strange occurrences and discoveries, she soon realizes this community that welcomed them into their home might be hiding something sinister…

Paramount+ is building a robust slate of original feature-length films, including QUEENPINS, from STXfilms and starring Kristen Bell and Kirby Howell-Baptiste; THE J TEAM, from Nickelodeon and starring JoJo Siwa; INFINITE, starring Mark Wahlberg and Chiwetel Ejiofor; the upcoming JERRY AND MARGE GO LARGE, from MRC Films’ Landline Pictures and starring Bryan Cranston and Annette Bening; as well as titles produced by Paramount Players, including PARANORMAL ACTIVITY: NEXT OF KIN, a prequel to PET SEMATARY and the original supernatural story THE IN BETWEEN, featuring Joey King.

The feature-length documentary UNKNOWN DIMENSION: THE STORY OF PARANORMAL ACTIVITY, which will provide fans a deep dive into the making of the “Paranormal Activity” films with interviews, never-before-seen footage and more, will also be available to stream Friday, Oct. 29 on Paramount+. 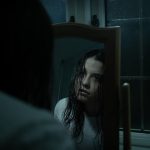 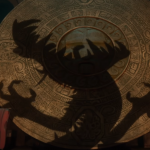