Remember a couple of years ago when “Sopranos” creator David Chase signed a new deal with HBO Max to develop… something?

Well, apparently that something is indeed “Sopranos”-related.

The “Many Saints of Newark” helmer is said to be developing either a new prequel series, sequel series or feature film set in the world of the Bada Bing.

Ann Sarnoff, CEO, Studios and Networks, WarnerMedia, told Deadline that the company was “thrilled” with the results of the “Sopranos” movie prequel-and want more.

“We’re talking to David about a new series, Sopranos related, on HBO Max,” she said.

Former “Lethal Weapon” actor Clayne Crawford will star in the ‘botched robbery’ crime feature “The Channel”. Max Martini and Hakeem Kai-Kazim will also star in the film, a William Kaufman-directed pic about “a desperate criminal (Crawford), his out-of-control brother (Martini) and their motley crew of ex-marines” as they must escape New Orleans and the determined FBI agent (Kai-Kazim) who pursues them. [More...]

The Blood List entry “follows a rebellious teenage girl who is sent to stay with her grandmother in a sleepy town whose quirky traditions include a curfew banning anyone from going out at night. When the girl ventures out after dark she discovers the murky truth behind the town’s mysterious history.”

Randall told Deadline, who have the scoop: “This is a fun monster movie that harks back to Amblin movies of yore. There is an intriguing conflict between the teenage girl and the older generations but it also has the thrills and action of a monster movie. It’s a great script.”

Veteran producers Joe Lam (“Fugitive Zero”) and Joe Barbagallo (“On Our Way”) are going into pre-production with their new horror thriller “The Fetus,” starring Georgina Okon (“Black Panther”).
Written and directed by Lam, the film follows the story of a man who must decide if it’s worth saving a demonic fetus that grows inside his girlfriend’s belly, which feasts on human blood to survive. The film is produced by Barbagallo’s BarBHouse imprint.

“The theme of this film involves the young couple accepting parenthood in the hopes that once their half human, half demonic fetus is born, they will be able to raise it with enough love to suppress its demonic side,” Lam said. “It’s part horror and part psychological thriller where we play witness to a growing evil that starts to consume this family and those around them as they struggle to make sense of it all.”

The movie stars Okon who portrays Cerise, the main villain who seeks to steal away the half human, half demonic fetus once it’s born in order to unleash evil onto the world.

The trailer for new actioner “Red Notice”, starring Dwayne Johnson, Ryan Reynolds, and Gal Gadot, has been released ahead of the film’s November 12 premiere on Netflix.

It’s the PRO vs. the CONS

An Interpol-issued Red Notice is a global alert to hunt and capture the world’s most wanted. But when a daring heist brings together the FBI’s top profiler (Johnson) and two rival criminals (Gadot, Reynolds), there’s no telling what will happen. 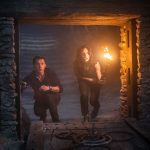 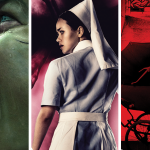