Who is ready for the season of creatures, spirits, and slashers? October is the universal month of all things horror and there is one franchise that embodies that the most…Halloween. A specter…a boogeyman…a shape that haunts and stalks in day and night. Pure evil incarnate. What is a scarier horror movie killer than that? Michael Myers has been stalking audiences and teenagers since the late 70’s all thanks to one of the greatest genre filmmakers of all time, John Carpenter. His involvement may only be on the composing side of things, but his spirit can be felt through and through in this rebooted franchise form David Gordon Green and Danny McBride.

But what do the combo of Green and McBride bring to this franchise? Their efforts with Halloween (2018) showed that they would bring a dark sense of humor to the proceedings but in general channel the spirit of Carpenter’s original creation. The film felt perfectly in line with how a Carpenter Halloween film will go and leaving things ambiguous enough to offer more. But we all knew this trilogy would bring us all back to Haddonfield but how would the tale continue? Unfortunately, Halloween Kills turns out to be a lame duck middle narrative that has no real beginning and no real end. And does the narrative really driven us forward or just spin wheels long enough to offer a third and final entry? They probably should have skipped to three if this is what they had to offer.

But what are to positives of this new and underwhelming addition in the long running Halloween franchise? Well…just look at the title. PLENTY of people get killed in a variety of brutal ways. Even if Green veers off from the more suspense drive approach of Carpenter in exchange for a blunt forced approach, the kills rack up quick and they are sure to delight those slasher fans out there. The music is top-notch as always in creating a suspenseful and unnerving atmosphere and Green is able to create some perfect rendering of 70’s filmmaking for the flashback sequences. The film even has some intriguing ideas…even if they do not feel like they come together.

But why do some many of these ideas not come together? First off, the whole first film made this about Laurie Strode…then did absolutely NOTHING with her or her family (for the most part) in this film. Save for the final 10 minutes, the Strode family are after thoughts. The film presents this mob rule mentality which is intriguing but none of these other characters are fleshed out enough to really care about and this subplot feels rushed. The characters are all one dimensional and feel like cannon fodder instead of characters to connect with. The film tries to build a deeper connection to the past with Hawkins and other characters but when they try to build a reason for all this happening, it just sounds like complete nonsense. No motivations and horribly cheesy and stiff dialogue leave a lot to be desired.

Why does Halloween Kills exist? Despite a cast full of committed performers (who are all almost completely wasted on this material), this just feels like an obligatory second entry to spread out the narrative to make more money. Did that work? Box office wise, absolutely. Narrative wise, heck no. But am I still excited for Halloween Ends? I cannot help but be hopeful that things turn around and we get a real follow-up to the first film’s promise. 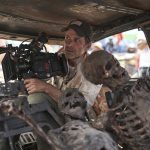