Filmmaker James Wan makes a return to the directorial seat for his first horror movie since 2013’s The Conjuring.

Malignant is an original screenplay written by Aleka Cooper, adapted from the story written by James Wan and Ingrid Bisu. Originally planned for release in 2020, the pandemic pushed its release out to 2021.

Horror fans hankering for the original film can now bask upon its brilliance.

The film opens on a stormy and dark Seattle coastline with an enormous building taking up the top of the edge of the coast. It’s the Simion Research Facility, in 1993. We meet Doctor Weaver, speaking into a camcorder about her work with Gabriel who has become malicious and strong. Weaver is interrupted to attend to an emergency, as she marches towards the sounds of destruction, we see flashing lights and exploding electrical sockets. There is something supernatural at work here. Attempting to get into the unit she is stopped, a woman pleading for her not to go in there, he will kill her. Entering the room, Weaver is bathed in the red light of hospital alarms, there is blood everywhere, it screams Argento and Bava. Weaver’s patient Gabriel has gotten out of control and she must stop him. Weaver prepares herself and declares “it’s time to cut out the cancer”.

Fast forward to the present day, a heavily pregnant and pained Maddy (Annabelle Wallis) returns home to her abusive husband. That night, Maddy starts to experience ominous and haunting sights and sounds in her home. Wan has brought his artistic stylings once again to bring to life the haunted house element he is known for in his films. Wan never opts for a cheap jump scare, we all know how well they are crafted and set up throughout his horror films. Malignant is no different, offering perfectly placed scares that are jarring and impactful. At night, we experience shadows and brutal death, without a single clue as to what is going on in the house, except that something has intruded on Maddy and her home. 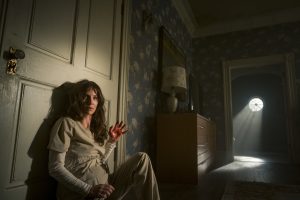 Maddy played by Annabelle Wallis displays a range showing her vulnerabilities and her strength to survive. This is the second collaboration with Annabelle and Wan after she starred in the 2014 supernatural horror, Annabelle which was produced by Wan. Annabelle shows the depth of the character Maddy and how her life has been affected since Gabriel. The most interesting part (for me) is Maddy’s relationship with her sister Sydney. Maddy experiences a night of sheer terror witnessing hallucinations of a murder. As Maddy is planted in the middle of her kitchen, the room starts to dissolve and melt away around her, placing her in the same room as the victim and their murderer. These scenes are done vividly to sew the two visual experiences together, Maddy placed as the anchor between the sequences on top of one another. These sequences are dreamlike and bring to life the dread and sense of entrapment through sleep paralysis and night terrors, it’s haunting and Wan’s artistic influence on these scenes are outstanding.

One of the greatest Giallo elements is tangled into Malignant – the police investigation and procedural aspect. Police officers Kakoa Shaw (George Young) and Regina Moss (Michole Briana White) offer a fantastic amount of humour, rationality and logic to the supernatural and unexplainable experiences that Maddy is enduring. Moss provides a brilliant foundation in questioning everything that is happening, suggesting that Maddy is the murderer. On the other hand, Shaw has bought right into the supernatural and is ready to find out what is going on. My favourite would have to be the clumsy forensic tech (played by Ingrid Bisu) who offers a reasonable amount of comic relief. 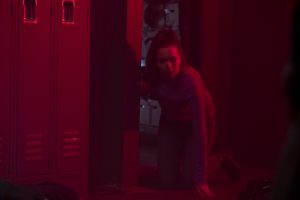 The mystery of Gabriel constantly unravels throughout the film as Maddy and Sydney investigate the mysterious origins of the serial killer. Returning home to their mother, she shows them some home videos that show Maddy speaking to an imaginary entity at her birthday party. These scenes provide a gutwrenching and disturbing exposition that continues the mystery into “who exactly is Gabriel?” and what had happened to Maddy before living with her adoptive family. Maddy’s mother Jeanne offering up the suggestion that Gabriel is an imaginary friend that Maddy conjured up after joining their family as a coping mechanism.

The body horror aspects of the film are a massive nod to Cronenberg and the influence that he has had on Wan’s filmmaking. The villain of Gabriel is a twisted and contorted person, who moves in an almost Venom-Esque like way, moving in a way that sets off the Uncanny Valley phenomenon in my brain. Gabriel is an interesting character, the cornerstone of his story is that he is the imaginary friend, inflicting havoc on Maddy’s adult life. When we discover the true identity of Gabriel, it is a pivotal moment in understanding how Maddy and Gabriel are intrinsically connected.

Fans of the horror sub-genre of Giallo, popularised in the ’70s, will be pleasantly surprised with the way in which Wan expresses his love for the genre. Malignant feels like it has warped and twisted its way through time directly from the sets and stories of Argento, Bava, and De Palma. Malignant sets itself apart from the classic Giallo films of the past, giving a breath of fresh air to bring the sub-genre into the modern era of film and artistic direction. Wan has stated that  “… because I’m such a big Giallo fan I’ve, I’ve harboured the desire to make a Giallo movie for a long time. And so when this story came along, it to me felt like a perfect marriage.”. Malignant is that perfect marriage of James Wan viscerality matched with his ability to bring together a mishmash of worlds into the horror genre.

The narrative of Malignant is told mainly through its imagery and music, proving that Wan knows how to capture an idea and bring it to life. For me, the script and dialogue fell a little flat in some scenes but was consistently supported by the fact that the art direction and aesthetics always grabbed the wheel and drove the story-telling vehicle. There is a scene where Maddy is running through the house and we have a top-down view of the scene. It is an elaborately crafted scene with dark tones in combination with a beautifully designed set, giving me the feeling that I am watching Maddy run through a human-sized dollhouse. There are many brilliantly shot scenes that show how well Wan does when in the Director’s chair.

Whilst the story had almost lost me in the third act to a narrative I thought was going off track, only to completely turn me on my head and rope me back in with a twist that sat perfectly with the subject matter of the story arc. The movie is supported by an incredible soundtrack composed by the talented Joseph Bishara  (The Covenant, Insidious, The Conjuring, The Unholy). Wan and Bishara do impeccable work together and Malignant is no exception, Wan using Bishara’s incredible music to cut scenes and bring to life every emotion felt by characters throughout the film.

The last 30 minutes of the film had me in the throws of some of the best-choreographed action and fight scenes that I have seen in a long while. As a fan of the action genre and especially ones with great fight scenes, there is a fight scene in a jail cell that had me with my jaw dropped wide open with sheer admiration. Fight and chase scenes alike had me in the midst of the action whilst Shaw takes on the role of lead investigator tracking and hunting down Gabriel, hoping to uncover the identity of the serial killer. It is these scenes that really bring the third act together in a medley of insanity, blood, gore, and visceral obscenity.

Malignant is the perfect supernatural horror that meets crime procedural that brings together themes of loss, grief, and belonging. It is the passion that Wan brings to the horror that makes his film such a pleasure to watch. It is a perfect blend of all the genres that Wan is passionate and well-versed in, inspired by fantastic filmmakers like Argenta, Bava and DePalma and you can see those influences come to life in Malignant.

Malignant is certainly that perfect mix of genres that brings a sensational film to the big screen. Not only is the film sensational, but Annabelle Wallis and Maddie Hasson are the perfect dynamic duo that depicts such beautiful sibling chemistry. Go into this supernatural horror with an open mind, it’s outrageous, gory, and so much fun! Consider this film lover letter to horror and horror lovers from Wan reconnecting to the films that have influenced and touched us all. 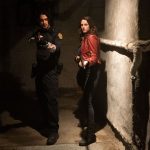 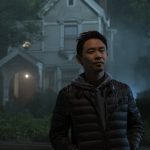