For fans who enjoy the darker side of cinema, it’s a fact that October is the “Holy” (for the lack of a better word) Month for us. As the leaves fall and the sun fails to appear with the enthusiasm it once had in summer, the darkness begins to take over. Thus, the lust towards the terror commences. And Folks, starting as early as October 1st. Yes, the very first day. This is because Like Dogs, an absolutely terrifying and brilliant indie horror film, shall premiere digitally. And Folks, if this is any indication as to what will proceed onward, we are in for a wonderful season of Horror.

Abducted, and treated like animals, 2 university students are unwilling participants in a behavioral experiment gone horribly wrong. It gets personal when the pair learn they’ve each been specifically targeted. Once people start dying it’s a race to escape and survive.

The premise of human experimentation is not exactly new in the world of horror. It has often been used metaphorically as a means to put a literal spin on truly terrifying subjects such as classism, racism, etc. But every so often, it can simply be a fun romp in the “what if” categorization. And that is what it feels as though writer & director Randy Van Dyke wanted to convey with Like Dogs. There isn’t much of a metaphor to this story, it’s simply a wonderful tale of betrayal, as well as the lengths that our own selfishness are willing to go to get what we want.

Is ”Like Dogs” a perfect indie horror film? Of course not. But perfection is a level that is impossible to obtain, and by all means, is subjective in nature. Yes, the film has a few plot holes that could be filled with small boulders, but at its heart, Like Dogs is an intense and terrifying experience. And at the risk of sounding too cliche, there are twists that are Shyamalan-esque in their own way. And who doesn’t love a good turn in a film that gives you that sweet “Ah Ha!” moment when something is finally explained? It’s always a good time when you simply do not know who you can trust when a story is being played out.

So Folks, do yourselves a favor and check out Like Dogs. It’s a fun indie horror film with a brilliant young cast that we are surely going to see great things from in the future. And you’re going to want to get in on the ground floor of knowing the brilliant work of a filmmaker like Randy Van Dyke. There are scares to be felt and fears to overcome in this gem of a horror film. 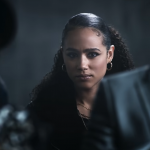