What is the key to making a memorable horror film? The great ones always find their own personality and deliver scenes that will live with you for a long time after the credits roll. Death Drop Gorgeous is by no means one of the great ones…but it sure is memorable and you will have plenty of fun along the way! You would be surprised by how much a little sass, a lot of flair, and plenty of show can do. This film centers around a club full of drag queens and a serial killer slowly taking them all out. What a concept?

What is one of the most surprising elements of this film? The fact that there are three credited directors on the film! Michael J. Ahern, Christopher Dalpe, and Brandon Perras are all integral parts of the creative process both behind and in front of the camera. This is not the cleanest or most cohesive film out there but the whole directing crew brings plenty of fun to the table. There are a few hallmarks of this film that stand out. Each performance is dialed up to 11. Could it get too much? Are some of the performances borderline parodies? Those might be true…but they are so much fun. The style is fun too. Combine the music and neon aesthetic and you really capture the spirit of the film. Then there is the gore…what a crazy ride it is? There is one scene with a glory hole and a meat grinder…that is all.

What about the characters themselves? Do we care about them? Out lead is one of the least interesting characters as he is more of a conduit into this flamboyant and over-the-top world that this film inhabits. Most of the drag queens are a blast as they slay in their roles. Many of them are playing versions of themselves and it shows as they are incredibly comfortable in their skin. What really stands out from a character standpoint is the killer. The mystery really worked for me, and it turns out the killer has some solid motivations that are extreme but somewhat understandable. We can relate to the core feeling they have (but obviously would not take these drastic measures).

But before I said this is certainly not an all time great…what holds it back? Narratively, the finale feels a tad convoluted and you really must suspend your disbelief. There are elements that feel introduced way too late and honestly feel like they make zero sense. You can also feel the low budget all over the film. Some of the effects are laughably bad and took me out of the film a few times. The sound mixing also leaves something to be desired. Then there are a few cast members who are obviously not actors…and it really shows.

But are buckets of campy and sassy fun enough to make this a must-see? Death Drop Gorgeous may feel a tad long in the tooth at times but it has so much fun with itself that you cannot help but do the same. This campy and silly horror flick is so confident in its own skin that it is really hard to completely avoid its charms. 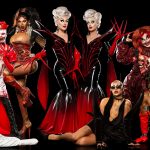 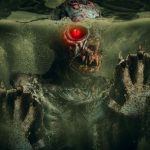