Chucky’s pop, Don Mancini has announced that production has wrapped on the first season of “Chucky”, the “Child’s Play” spin-off coming to SyFy and the USA Network.

A new teaser trailer and poster for SyFy’s “Chucky” series were recently released ahead of the October 12 premiere.

In addition, Mancini spoke to EW and spilled the tea on the plot.

“The main character is a 14-year-old gay boy who’s bullied and sort of lost after the recent death of his mother,” says Mancini. “He’s a young artist [making] sculptures with doll parts. He finds Chucky at a yard sale and buys him, but it turns out that he gets much more than he bargained for.” 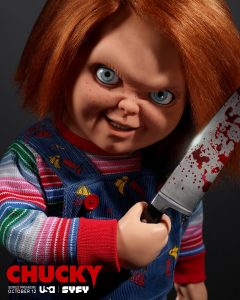 “One of the things I wanted to do was bring [the franchise] back to its Child’s Play roots and have the protagonists [be] kids. But since, with the first couple of movies, we’d already delved into having little kids I wanted to explore something different, so this time we’re exploring young teenagers.”

“One of the things that we pride ourselves on, and I think makes our franchise singular, is that we have spun a relatively consistent and coherent narrative over the course of 33 years and seven films and now eight episodes of television,” says Mancini. “I think that’s one of the things that our fans like about the Chucky franchise. I deliberately ended Cult of Chucky on a series of cliffhangers, major cliffhangers, because I knew a TV series would be the ideal place to accommodate delving into the ramifications. So we begin the series introducing our new story, our new milieu, and then we start to bring the veteran characters into the story, and it all comes together for a big showdown.”

Having heard that folks love “Child’s Play 2”, Mancini asked for the doll to be modeled after Chucky’s look in the 1990 film.

“Over the years, I’ve heard that the consensus fan favorite among all the movies is Child’s Play 2,” says Mancini. “I think one of the reasons for that is how Chucky looked in that movie and how the late director John Lafia, who passed away last year, shot Chucky. Our goal with the series was to bring Chucky’s look precisely back to that. Tony Gardner and Peter Chevako (special effects artists responsible for creating the show’s puppets) have done a great job. I think fans are really going to love that.”

THAT’S A WRAP! Chucky wants to honest the fuck thank everyone, in front of and behind the camera, on this fucking momentous occasion… pic.twitter.com/ZdUCK5fs8N 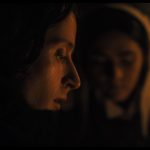 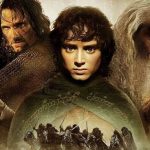