How do you feel about people? I know plenty of people who are introverted. They shy away from the spotlight and interactions with people. Then there is the opposite. There are plenty of individuals out there who LOVE people. Interacting with them…learning about them…watch them. The idea of voyeurism is an intriguing idea. There are moments where I find myself watching others with so many questions running through my head. What are they thinking? How are they feeling? What is their life like? Enter Eye Without a Face…a film that takes this idea to the extreme.

What do I mean by that? This film’s protagonist is not exactly the most relatable or genuine human being. Henry is agoraphobic as he keeps himself as a recluse in his home with one primary hobby…watching. Woman specifically…but with an unnerving intent that makes your skin crawl. Henry will hack into the webcams of young women and gaze upon them at their most intimate moments. Not exactly the type of protagonist we are used to from most films. His roommate is also a failed actor and YouTuber as this film leans heavily into this relevant new age world, a virtual experience. This certainly feels like a spiritual reimaging of the core premise of Rear Window…except for a completely new sensibility.

But does writer-director Ramin Niami take this eerie set up and challenging leads and provide the audience with a worthwhile experience? In certain ways, he totally does. Niami delivers a unique look to the film (even with a drastic and unnerving Dutch angle from the jump of the film. A woman stands (armed) and that intrigues bleeds through the rest of the film. The narrative does get a tad repetitive (how many young women can Henry sit and stare at through his electric eye?). There is an intriguing mystery thrown in as well as young women being murdered. Who is doing it? Henry has ideas.

Besides the technical positives and the mysterious aspects, how does the rest of the film hold up? Dakota Shapiro is thrown to the front line with his lead performance as Henry. He has a wide range of what he is expected to do in this film. There are scenes that feel a bit flat with his presence but there are others where he does shine enough. Luke Cook of The Chilling Adventures of Sabrina fame does have some solid moments throughout the film but in all honesty, the acting is not what will keep you watching this film. The narrative (when it does move along) has some twists and turns along the way there will keep its audience on their twos. Oh…and this is a horror film too. So, is it scary? The film has a more atmospheric feel to it as it builds tension, but the finale does deliver some slasher thrills as well.

Does this film come together for a worthwhile experience? Eye Without a Face has such an eerie concept and a few specific aspects that are impressive. But does it really come together? Not as much as you would hope. With a stronger set of characters and a more directed narrative, this could have been great. But it settles on being a solid ride for genre fans out there but will probably alienate many of those who are not true genre fans. 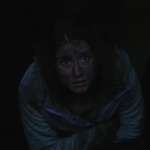 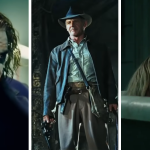