Well…some films aren’t as subtle as others, are they? With a title like Road Head, you might wonder what this film is actually about. Does it refer to the sexual act inside a motor vehicle that is alluded to by the title? In this instance…there is not much subtlety to what occurs in the film. But is this even important to the film? For most of the run time, you think that it is at least. But this is a special kind of film…things make less sense as more things are revealed. Does that necessarily mean this is a bad film then? Let’s take a look, shall we?

Based on the poster, is Road Head going to be a fun and campy horror romp that will live on in some cult classic realm amongst a group of people who can quote every line? Honestly…this definitely fits that bill. This campy and B-movie visual with 80’s text, big read lips that would make the Rolling Stones jealous, and a pair of decapitated heads might make you think this is from the crazy mind of Sam Raimi (one of the main reasons I was legitimately excited to check this one out). Who does love some campy horror comedy? This film is from actor turned director David Del Rio who has appeared in such classic films as Pitch Perfect, The Belko Experiment,…and Grease Live! This film certainly has a humorous and zany type of feel while still offering a plot filled with danger and one extra strange cult. Del Rio provides enough of a self-aware tone that makes this experience considerably more fun than it could have been.

But besides the sexual act of its title, what else actually happens in this film? The Mojave Desert…to set the stage. Young people driving along…enjoying their favorite activity inside a car. A hooded figure wielding a sword…lops off their heads. Is this the type of trope where the youth are punished for their sexual transgressions? Or is it a random act that will grab the audience’s attention with its name? Honestly…we never really gain enough perspective to make that call. 84 minutes into this crazy film and you will never know for certain. But then three friends (a gay white couple and their female friend of Dominican decent) are riding along in the desert. Stephanie is dealing with a harsh break-up (she is visited often by the specter of her ex-boyfriend who annoyingly shows up at the worst times) while Alex and Bryan just wanted to enjoy time away together. During Stephanie’s napping, Alex and Bryan…you guessed it…perform the titular dead…leading to the arrival of our sword swinging antagonist. After adding a third papier-mache looking decapitated head to the collection, our two remaining protagonists are on the run.

But there is still an hour left in this film? So where does it go? Not to spoil the surprise…but this gets weird! A strange, isolated society with incels and drag queens are just the tip of this crazy iceberg. But does the film come together in a meaningful way? The is certainly debatable. The film features some earnest themes of taking ownership of one’s life but the ending really leaves you wanting. Luckily there is a decent influx of quirkiness and charismatic performances from leads, Elizabeth Grullon and Damian Joseph Quinn. Road Head just might be the perfect example of a film that is less than the sum of its parts. There are standout elements in this horror flick but it really doesn’t amount to much in the end. So…should you watch it? If you are the kind of person who enjoys weird and campy genre flicks and have a penchant for cult classic cinema? You just might have to make this a new midnight viewing experience. But for the rest of you out there, you just might have to reject the offer for Road Head. 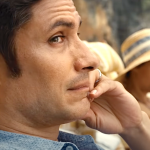