Playing out rearward, Toronto-set “The Oak Room” fixes on a drifter (RJ Mitte) who enters a bar just before lock-up time, 11PM. The guy has been missing for years – even ditching his dad’s funeral – and Paul, the owner of the establishment, demands to know what’s been happening in his life. Steve digs in and reveals an incident that happened at a bar a week earlier.
Over at another bar, The Oak Room, another chap (Ari Millen) is locking up when a stranger, Richard (Martin Roach) is let in for another after-close drink. Seems he’s walked two miles, in the white stuff, and the owner thinks he’s owed one.

An atmospheric and effective mesh of ‘’Misery’’ and ‘’Rear Window’’, low-temp thriller ‘’The Oak Room’’ scores points right off the bat for its casting. As Steve, “Breaking Bad” alum RJ Mitte is a revelation, showcasing every gamut of emotion as his perplexing arc comes to light, culminating in an unpredictable showdown.

Directed by “Let Her Out”’s Cody Calahan, and also starring Peter Outerbridge and Ari Millen, “The Oak Room” is the latest modestly-budgeted genre film from Canadian troupe Black Fawn Films. Like their previous efforts, namely “The Heretics” and “Bite”, “The Oak Room” makes full use of it’s few but fascinating locales, simmering pace, as well as the likeability and range of its lead. 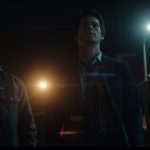