While out promoting “Sonic the Hedgehog” earlier this year, Jim Carrey mentioned that – of all his earlier films – he’d be keen to reprise the role of The Mask.

This week, images from the “Space Jam 2” wrap party revealed that such classic characters as Pennywise, Voldemort, The Joker and The Wicked Witch make appearances in the film (likely as spectators or referees at a basketball game) – as does… The Mask!

So, who is that behind the lime CGI there? Sure does look like Jim Carrey. At the same time, could be just a good look-a-like.

Whatever the case, fans of The Mask will no doubt be dead keen to see his big screen comeback when “Space Jam 2” hits theaters July 16, 2021.

Leaked Space Jam 2 images, and my hype has gone through the roof.

Pennywise, The Joker, The Mask, The Wicked Witch of the West all making appearances… Hell yeah, I'm down with this pic.twitter.com/JhiV5123tA 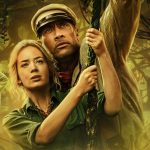