Welcome aboard the “Batman” train, Paul Dano! In what we think is the perfect choice, Dano has been cast as Edward Nashton, aka The Riddler, in the upcoming flick “The Batman”.

“The Batman” has Robert Pattinsonplaying the Caped Crusader, recently announced Zoe Kravitz as Catwoman, and Jeffrey Wright as Commissioner Gordon. Matt Reeves is directing the film for Warner Bros.

Previously the Riddler has been played by Frank Gorshin and John Astin in the 1960s TV series, while Jim Carrey played him in 1995’s “Batman Forever”, directed by Joel Schumacher.

Per THR, The Riddler was created by Bill Finger and Dick Sprang: Edward Nygma, or “E. Nygma” (get it?) — a supervillain who aims to challenge Batman in a battle of wits, leaving clues and riddles for the world’s greatest detective to solve in order to catch him.

Dano was recently nominated for an Emmy for “Escape at Dannemora”, and directed, co-wrote and produced the critically acclaimed film “Wildlife”. He’s also known for his roles in “12 Years a Slave”, “Little Miss Sunshine” and “There Will Be Blood”, to name but a few. 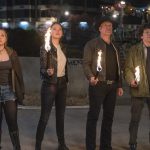